Libido In A Couple: Sexuality Is A Team Sport

In heterosexual couples, the lack of libido is a frequent complaint of women. Unfortunately, the advice of magazines or friends are often insufficient to “kick-start the engine”. This is not surprising because when we consider in a case by case how the couple builds their marital sexuality, it is rather the maintenance of an active libido that would be surprising. For obvious reasons and others that are much less so. 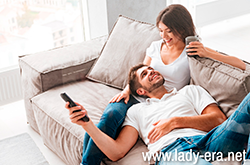 Obvious reasons go along the lines of the sexual relationships being imposed, monotonous or unpleasant. In these cases, the libido is extinguished in one or the other partner, or both! Because one-way relationships end up defusing the libido, unless it is occasional or the couple’s wish. For reasons less obvious, however, than those related to the lack of assertion of sexuality of the two partners who miss being a part of the “intimate team”. Or when the couple remains committed to a model of sexuality based on excellence.

That’s why psychology professor Barry McCarthy and two of his American University (Washington) students, Candace Koman and Danielle Cohn, propose a new therapeutic approach in the journal “Sexual and Relation Therapy”. With two essential ideas. First, to consider the situation as a problem of the couple and not only that of the partner. Secondly, to opt for the GHG, the “Good Enough Sex”, ie a more human sexuality, of high relational quality.

“The GES should not be confused with poor sex, boring, without passion or desire,” say the authors. On the contrary, it is a sexuality “guided by the mantra desire / pleasure / eroticism / satisfaction”. GES accepts variations of desire and pleasure as an inevitable part of a couple’s sexuality. Contrary to what we see in cinema, the rule of three thirds applies roughly in couples in sexual harmony: 1/3 of sex very satisfying for both, 1/3 of reports more satisfactory for the one for the other, 1/3 of the reports unsatisfactory for both.

This does not prevent the pleasure of connecting and sharing intimate moments. It is not a question of seeking at all costs the maximum of intimacy because the desire also feeds of a certain distance (autonomy of the partners) but to reach a sufficient level not to have the impression of being judged by the other. On the contrary, one should feel confident, safe, and able to express our desires without fear, shame or guilt. Also free to be creative and experiment. As such, “fail” in a new erotic experience is rather a sign of vitality of the couple. Those who no longer take “risks” slip insidiously into the sexual routine.

Many of those with libido problems find themselves engaged in anticipation cycles of anxiety, performance-oriented sex (focusing on penetration and orgasm as passing exams in which succeeds or fails), frustration, embarrassment and avoidance. It is the woman’s responsibility to find and make her ”sexual voice” heard. In fact, it is everyone’s responsibility, including in homosexual couples.

Finally, if you are at a standstill in your sexual relationship, a sexologist or a coach can help you find the exit from the vicious cycle polluted sometimes manipulations, remonstrances and little revenge, or simply misunderstandings. Because if everyone insists on the importance of good communication in the couple, it is not always so easy when it comes to the issue of sexuality.