The Specificity of Diabetes in Women

Based on the data provided by the CDC, as of 2017, about almost 12 million women got diagnosed with diabetes in the USA. An observational study published in the Official Publication of The College of Family Physicians of Canada claims that females with a family history of diabetes are more inclined to evolve the disease. At the same time, they are better educated as to what kind of illness it is, and how to manage it.

Women suffering from diabetes face a number of difficulties because of their health condition. Let’s get acquainted with some of them.

Diabetes and excessive weight often go hand-in-hand. Both issues are very likely to cause troubles with the heart and vascular system. A continuous influence of abnormally high amounts of blood glucose on the inner walls of the blood vessels results in their damage and gradual loss of elasticity. Over time, it will provoke hypertension.

Heart disease is known as the most common complication of diabetes, and sick women are four times more likely to get a heart attack if compared to healthy individuals. What’s more, the outcomes of myocardial infarction are much more serious in women than in men. The American Diabetes Association states that one in three diabetic women will die of heart disease. 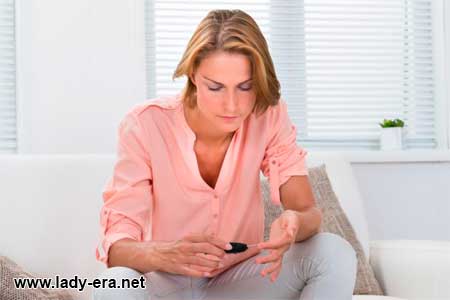 Chances for getting a urinary tract infection are higher than 50% if you are a woman with diabetes. As it has already been mentioned, high blood sugar damages the blood vessels and the circulation of blood in the pelvic organs gets worse. Because of this, it is much easier for the infection to develop.

Abnormal levels of blood sugar create a favorable environment for the development of genital yeast infection. If the deviation from the target glucose level is high, a woman is more likely to get thrush.

Females with diabetes may have heavier menstrual bleedings and they may last longer. In addition, the hormonal changes in the body may affect the levels of sugar in the blood, which demands additional attention.

Polycystic ovaries are often linked to the changes in the way a female body responds to insulin. It is thought that hormonal disbalance, which is a common thing in women with PCOS, may be one of the triggers of diabetes appearance.