Endometriotic cysts are pockets filled with “old” blood, of endometrial origin; normally, they measure between 2 and 5 centimeters in diameter, but, in some rare circumstances, they can even reach 10-20 centimeters. The typical symptoms of a generic endometriotic cyst consist of: abdominal cramps, pelvic pain and painful menstruation.

The rupture of an endometrioma – a condition that, in the medical field, is considered an emergency – is responsible for: severe pelvic pain, blood loss from the vagina, fever, nausea and vomiting.

The treatment can be pharmacological or surgical, depending on how severe the endometriotic cyst is present: in general, small cysts require drug therapy, while large cysts make surgery indispensable. The rupture of an endometriotic cyst is a medical emergency, for which it is best to contact your doctor immediately or contact the nearest hospital. 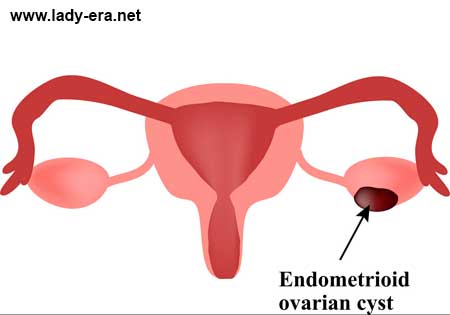 Scientific studies have shown that the endometriotic cyst does not compromise the quality of the egg cell, but rather interferes with the development of the follicle and with the ovulation process. (NB: ovulation is the escape of the mature egg cell from the follicle, towards the fallopian tubes). Failure to carry out the correct ovulation process means that the meeting between the mature egg cell and the spermatozoon is unlikely or, alternatively, very dangerous. The danger that lies behind such a situation is the risk of an ectopic pregnancy.

In general, however, drug treatment is the first line therapy, while surgery is the therapy adopted in cases where drugs are ineffective.