Polyps of endometrium: causes of growth and ways of curing

Endometrial polyps are diagnosed in 24% of women. However, their incidence is much higher in postmenopausal women.

They may be different in size, starting with a couple of millimeters to the size of an orange. Polyps are usually non-cancerous growths, yet as they grow bigger, the potential for turning into a malignant process grows from 4.8% in premenopausal women to 10% in postmenopausal. Hence, timely detection and treatment (if needed) may help you avoid a number of serious health issues.

When can a woman suspect polyps growing in the uterus?

Early stages of the disease may go without symptoms, and women cannot even suspect that there is something wrong with their intimate health. Yet, as the illness progresses and the polyps grow bigger, they may start experiencing: 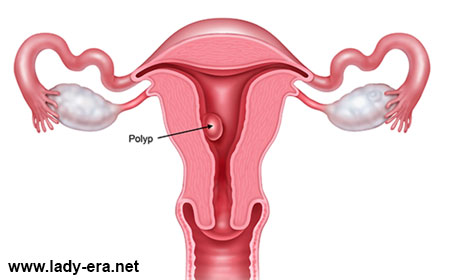 Sometimes, endometrial polyps may cause vaginal bleedings in menopausal women. By the way, being menopausal is one of the factors of risk for uterine polyps. Among the others are:

Hormonal replacement therapy and intake of tamoxifen for the breast cancer therapy also elevate the chances for endometrial polyps.

A history of miscarriage or infertility may also signal about the polyps growing in the uterus.

What causes the growth of polyps on endometrium

Is there a cure?

The only possible method of endometrial polyps’ cure is their surgical removal. The procedure is called hysteroscopy. A doctor has the possibility to see the uterus from the inside with the help of a special camera. Thanks to this, he can detect and remove all the new growths.

Another way of dealing with the issue is the intake of hormonal preparations. They may be helpful in diminishing the symptoms caused by the polyps. Nevertheless, the effect of such treatment doesn’t last long and the problem itself doesn’t disappear.

For the women whose disease goes without symptoms, a waiting tactic may be applied. Yet, a regular gynecological checkup is needed in order not to miss any hazardous processes.